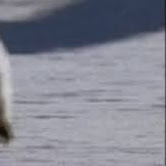 The power supply in your computer takes the 220v AC (+/- 10% , in Europe countries are supposed to standardize around 230v +/- 10% or something like that) and converts it internally into around 400v DC and from there, the power supply produces the voltages the computer needs ( 12v DC, 5v DC, 3.3v DC) all in the amount the parts need at  that moment in time... the power supply only takes as much power from the mains socket as the components require at a moment.

If a power supply has 500w on it, that doesn't mean your computer consumes 500 watts all the time, it simply means that if components inside your pc demand some power, the power supply can create this power, up to a maximum of 500 watts.

It won't matter to you, but maybe others would appreciate it.

When the power supply takes the 220v AC (or 110v AC if in US or other such countries) and converts it to around 400v DC and then again converts this to the smaller voltages the parts want ...these conversions aren't perfect, there are some losses which result in heat produced and that's why power supply has fans.

But what I'm trying to say is that these conversion losses can be up to 10-15%, so for example if the components inside your computer consume 300 watts when you're gaming, your power supply may need to take 350 watts from the mains socket in order to "create" these 300 watts for the parts in your computer.

If your power supply says 500w on it, then if the parts take this much amount of power, the power supply may need to take 600 watts from the mains socket in order to create those 3 voltages and send all those 500w to all the parts in your computer.